Oakland Community College has been a mainstay in Oakland County for the last fifty years – educating leaders, professionals and champions across innumerable industries. This year, we have the distinct pleasure to be in our 50th year of service to our community. To honor this golden anniversary, the Auburn Hills Campus President’s office and Student LIFE is thrilled to announce the 50th Anniversary Mural Design Competition! 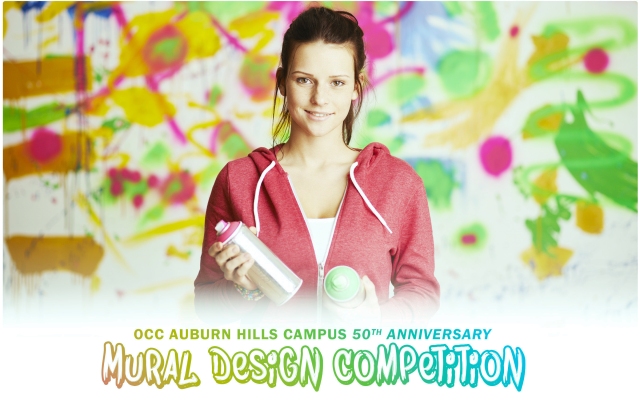 The competition is open to all OCC students and alumni. One winning design will be chosen. The winner will receive a paid contract commission (to include supplies) in the amount of $1,000 to paint their design on a designated indoor wall on the Auburn Hills Campus. Electronic versions of artwork may also be showcased in the college media communications, such as the website, print publications and social media pages. The winning artist will be invited to a mural unveiling ceremony in March, 2015.

The contest opens on October 25, 2014. The deadline for mural design submissions is Monday, December 1, 2014. The theme of the mural must incorporate all of the following:

The winner will be notified in mid-December. There is no fee to enter and students may submit multiple entries; however, each entry requires its own contest form. Artist must provide their own supplies. Commission draw may be considered for supplies upon request. Final rendering must begin on or after January 5, 2015 and be completed no later than noon on March 2, 2015.

This blog is written and maintained by OCC's Marketing and Communications Department. Submit stories, ideas and feedback to webcontact@oaklandcc.edu.
View all posts by OCCollege →
Quote | This entry was posted in All about the 50th!, Auburn Hills, Events, Students Doing Cool Stuff and tagged Auburn Hills Mural Design Competition, OCCis50. Bookmark the permalink.