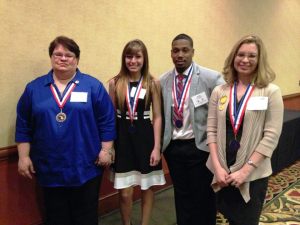 “The Lansing program is always a great event.  The students get to tour the capitol, sit in the gallery while Senate is in session, meet some of their state representatives and are introduced to the Senate,” said Michelle Casanova, OCC Auburn Hills PTK Advisor. “Then they attend the awards program and receive their All-Michigan Academic Team medals and certificates.  It’s such a great way for these students to be recognized.”

OCC’s five All-Michigan Team award students are also in the running for national recognition at the All-USA Community College Academic Team. Winners will be announced in April.

PTK is the largest honor society in American high education with more than 1.3 million members internationally. It serves to recognize and encourage the academic achievement of two-year college students and provide opportunities for individual growth and development through honors, leadership and service programming. PTK has over $38 million dollars of scholarship money available for students in the organization to either complete their two year degrees at OCC or to transfer to four-year colleges and universities.

“As an advisor for the past 12 years, I’ve been personal witness to so many students who have turned their lives around through PTK—from older students who have a second chance for an education, to young, high-school aged students who have so much energy and potential,” said Casanova. “I’ve seen so many blossom into great leaders through their experiences in running and being involved in their OCC PTK Chapter.”

PTK Chapters are offered at all of OCC’s campuses. Students who have completed 12-credit hours at OCC and maintain a GPA of 3.5 or above are eligible for membership. For more information on PTK and to view their upcoming events, please visit https://www.oaklandcc.edu/PTK/.

With five campuses throughout Oakland County, OCC is celebrating its 50th year. OCC is the largest community college in Michigan and the 25th largest in the nation. It offers degrees and certificates in approximately 100 career fields and university transfer degrees in business, science and the liberal arts. Nearly a million students have enrolled in the college since it opened in 1965. To learn more about OCC, visit www.oaklandcc.edu.