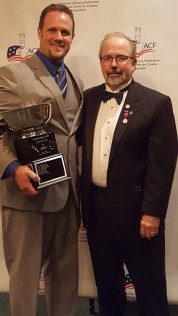 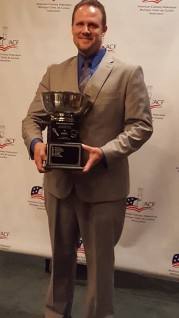 In a region known for its foodies and talent, winning is important to OCC’s Culinary Studies Institute (CSI) alumni. Great chefs know winning takes passion, stamina, creativity, attention to detail and remarkable training as the key ingredients – and the competition is as stiff as a good meringue on a holiday pie.

For the fourth year in a row, a graduate of OCC’s award-winning culinary program picked up the Chef of the Year award while the Pastry Chef of the Year and Chef Educator of the Year also went to OCC graduates in this year’s annual American Culinary Federation (ACF) Michigan Chefs de Cuisine Awards.

“Rob was a very talented student and a team leader for the OCC culinary team who won a silver medal during that time,” shared his former OCC instructor Chef Kevin Enright CEC/CCE/AAC. “He has worked hard on becoming a truly talented chef.”

Chef Mark Slessor won Pastry Chef of the Year. Slessor is the Pastry Chef at the Royal Park Hotel in Rochester and graduated from the OCC CSI program in 2006. This is the third time OCC alumni have won this honor in the past four years.

Chef Educator of the Year went to Chef Terri Briggs, a faculty member at Washtenaw Community College and a 1997 graduate of OCC. Rounding out the sweep was Andrew Dos Santos, who picked up the Student Chef of the Year award. Dos Santos, 20 and a Farmington Hills resident, works at Walnut Creek Country Club in South Lyon. He will graduate from the CSI program in 2018.

Competitions for the awards took place in August and September, and the awards were announced this fall. Chefs, nominated by their peers, had to meet rigorous standards established by the ACF and then competed in a hot food competition. They were evaluated and scored by certified ACF judges on their performance.

The winners will go on to compete at the ACF Regional Convention February 16-18, 2018, in Madison, WI, where they will compete in another hot food competition against chefs from the Midwest. Winners of the regional competition move on to the national competition next July in New Orleans.

“OCC’s Culinary Studies Institute has a long history of graduating outstanding chefs,” said Susan Baier, OCC faculty, past program coordinator, and herself a 2014 winner of the Michigan Chefs de Cuisine Educator of the Year award. “We are proud of their many accomplishments and delighted that they, and our program, are consistently recognized by the state and national organizations like MCCA and ACF.”