According to Riley, from the first anxious moment he interviewed for the Mental Health/Social Work program which Stotts coordinates, Riley had no idea the academic and personal voyage that lay before him. He knew Stotts carried a reputation of caring deeply for his students at OCC and personally attests to his deep commitment and special care ensuring his students reach their full potential. 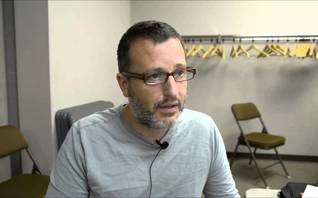 “As a result of Dr. Stotts’ leadership and instruction, I have become not only a respected professional, but also a more well-rounded member of society,” said Riley. “I accomplished more than I thought possible in my time with Dr. Stotts and only hope to, one day, be as influential and inspiring to students as he is on a daily basis.”

From early on, Stotts has always had a goal of helping people. Prior to joining OCC, he spent time rehabilitating veterans who had lost their sight and mentoring at-risk children and teens at the Crossroads for Youth treatment agency. He then moved to a counseling role with OCC in 2004 and, seven years later, decided he wanted to teach more formally in the classroom.

By all accounts, his move from practice to classroom teaching was beneficial for Stotts in his career aspirations but, more pointedly, for all the students who walk through his door. From their reviews to his reputation with colleagues, it’s easy to see why he was selected for such an honor.

When asked how Stotts felt about the tribute he replied, “I was touched and humbled to receive such an honor but mostly I’m excited for Matt! Sometimes, you just have this wonderful opportunity to see the potential in your students before they see it themselves, and it’s great to see the professional Matt has become.”

By award, impact and affect, Stotts remains influential, self-effacing and aspiring by all accounts.